There is one he made that looks like a Giant Tank like thing with wings - debating whether to include it as a Heavy Destroyer.

Cant recall what it was called without searchin. There were 3 variations of it colorwise on Battleclinic


But I agree, The Romulan Empire shall look pretty sweet when its 100%

Heading to bed now, but I'll stick some more up tomorrow, heres a couple to keep the juices going

^Defiant, and the revised Defiant Refit model (Supplied by EOmega)

EO's Seeker is awsome. It will surely be a wonderful addition to the Federation fleet

The Seeker looks even better when you look at EO's thread where he compares it to the original, which I think was about 16000 polygons.

Some more pictures for ppl's delight. Just to let you know I have to go back into hospital for a while as this treatment plan isn't working as hoped so I could be in for a day or too or more so things on my end maybe quiet for a little while, I'll let ya know what goes on when I get back

A nearby and unsuspecting Intrepid is also attacked...

Captain going down with his ship?... Stats after 1 sweap from the Sernaix

The Dreadnought moves on... 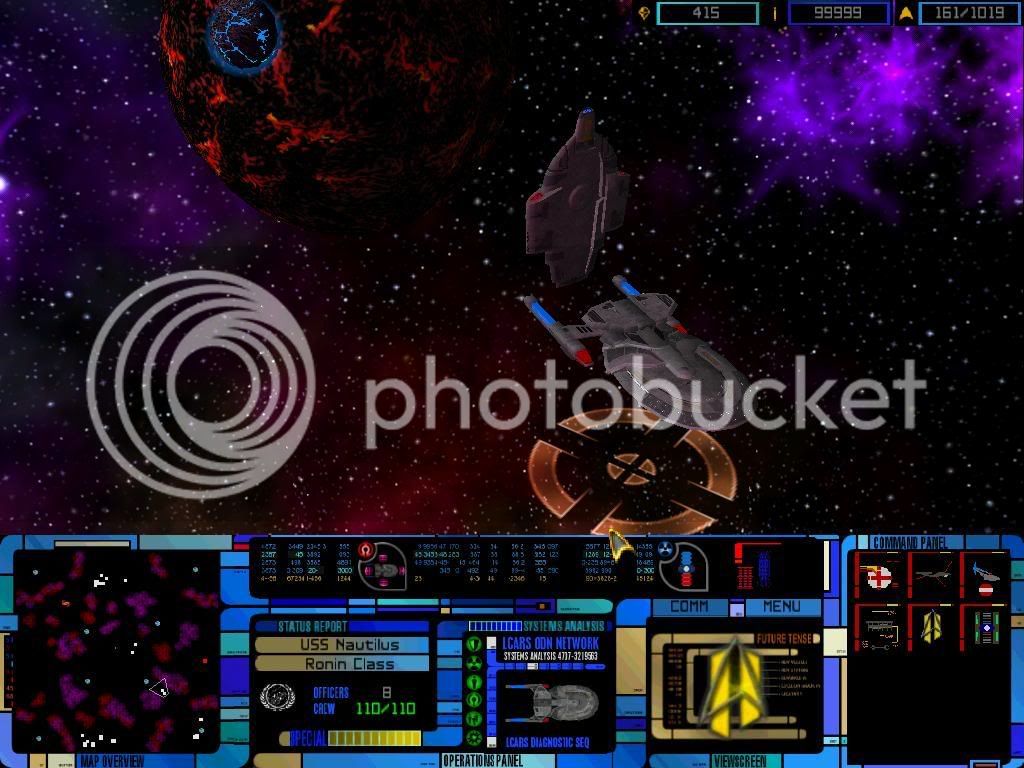 Disabling their engines, a cheeky Nebula uses the map to their advantage...

Theres something oddly familar with this scene...

A Republic Class finds the remains of the Defiant...

Nice black hole. Did you make it yourself or is it a modification of Michael Raabs? KA2 has one very similar, based on Raabs model.
Top

Was made by Quantum Halo a couple of years ago, though it went through a recolor and some revisions

1) Good screen shots. Models look clear and easily identifiable.
2) Love that GUI. Great stuff indeed.
3) I dont' know but you migh twant to recheck where the tractor is coming from on that one towing the defiant. it looks a strange point for it to work from.
and,

4) I'm afraid it looks like a black sphere in the middle of that black hole, and I think you might want to check out some shots of proper black holes and those from the film as none I've seen look anything like that one (just not realistic enough for my liking).

Some of the above are artist impression but the last one is a radio telescope view of a real one.
Top

All in all pretty awesome.

One thing that would be pretty awesome for a black hole, though not possible in Armada as it stands, would be a black hole pulling in a ship in a radial manner, and tearing it apart as it disassembles the matter of a ship, turning it into dust. A black hole wouldn't likely be visible until you saw a ship going into one very slowly and being torn apart for what would seem like no reason.
Flew in here 17 years ago, flew out 13. Back then early 20s, dreamin'. Now, late 30s, reminiscin'. Too bad there wasn't an Armada 3, except the Sins of a Solar Empire mod. But hell, at least there's that. *Shrugs*
Top

I got a better idea! After that, a alien starship apears that looks like a plate goes underneath the federation starship then the fed. starship turns into spagetti(I spelled wrongly) and flys onto the plate... The antimatter make nice paste... But you could always try Red Alert Chicken Soup with it... Afterall It was suggested by someone as Neelix's replacement...
Top

Star Trekkin' across the universe, because I STILL can't find reverse!

Usage Permission; All are free to use and edit my work in any way they see fit, so long as credit is given where it is due.
Top

I think that was sarcasum

saying something when you mean the opposite.
Top
Post Reply
111 posts