Question: How do you actually created as a multi-Install Mod exe.Datei ??? The subject would interest me ^^ .

This may be difficult to some but easy to others, this will just depend on your coding abilities.

next extract rar to your "C:\ drive" the location is important, if you want to use in different location you can do this but many entries in "script.iss" would need to be edited.

next inside the folder you just extracted you will need to install a few programs used to by the scripts for mod creation.

run "ISSI-Setup.exe" installer (this is an addon set of scripts used by installer) You should install to default location "C:\ drive" the location is important, if you want to use in different location you can do this but many entries in "script.iss" would need to be edited.

First lets test if every thing is installed properly.

open the "script.iss" file in "SSM" folder you placed in C:\ drive.

it should look like this. (photoshoped so you can see everything) 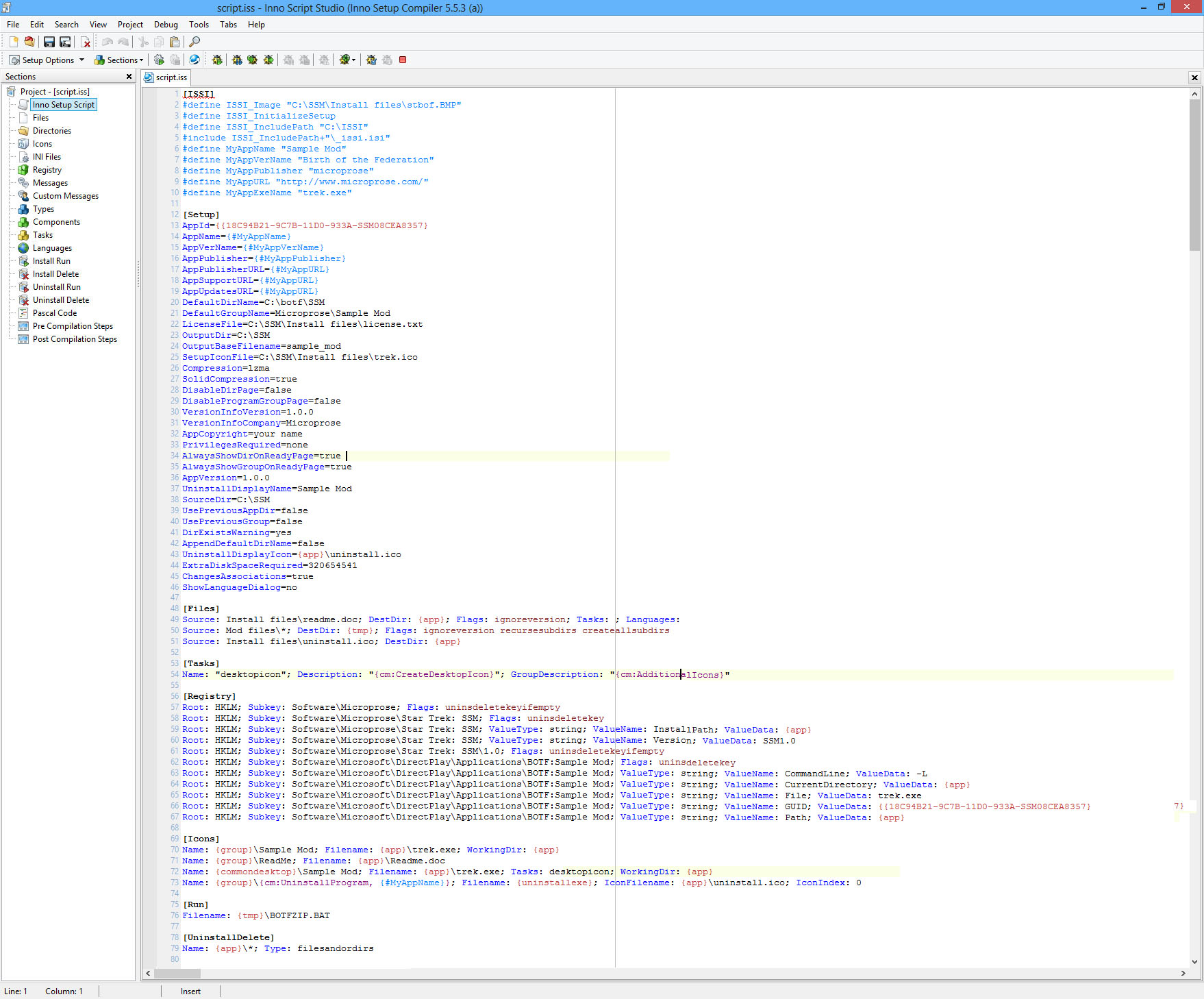 next find the compile button in tool bar

you should have a new file in your "SSM" folder named "sample_Mod.exe" run this file to install test mod. (this mod is the exact same as vanilla except it will use a different folder "SSM folder" and the trek.exe has been edited to also use this folder.

first plan out your mod, things you will need.
Once everything is installed and tested, you would need to start preparing the "script.iss" for your mod.

Before you start editing create a new folder and name it your mods folder " examples UDM, BOP, UM5 (size 4 max)" then copy from "SSM folder" the folder "Install files" and folder "Mod files" and file "script.iss" this script.iss is the one you will edit.

Inside the "Mod files" folder you will find a file named "mod.kix" open this file with your hex editor.

there is only one thing to change within this file. Do a search for "SSM" (this should be on line 68) change this to your folder prefix you used in "script.iss".

Your edited file must be placed in the correct locations.
Now reopen your "script.iss" and compile new installer.
then test.

If you have any questions just ask. (I am sure I forgot a few things, I do these without thinking anymore)

Re: How to create multi "mod" installer

I made this a sticky I feel its important.

I also moved some things into announcements.
Not for the weak of heart...

Return to “HOW TO: Create multi "mod" installer”