There is a good chance it has already been asked.
Post Reply
6 posts • Page 1 of 1

I was looking at the shiplist.sst and noticed some areas are not list/explained. So I created a new table with all the info I could find.

I hope to find/get some help with the unknown lines in image below.

I know some of the hex type is not exactly described correctly (1 byte unsigned ect) I just used term from UE. 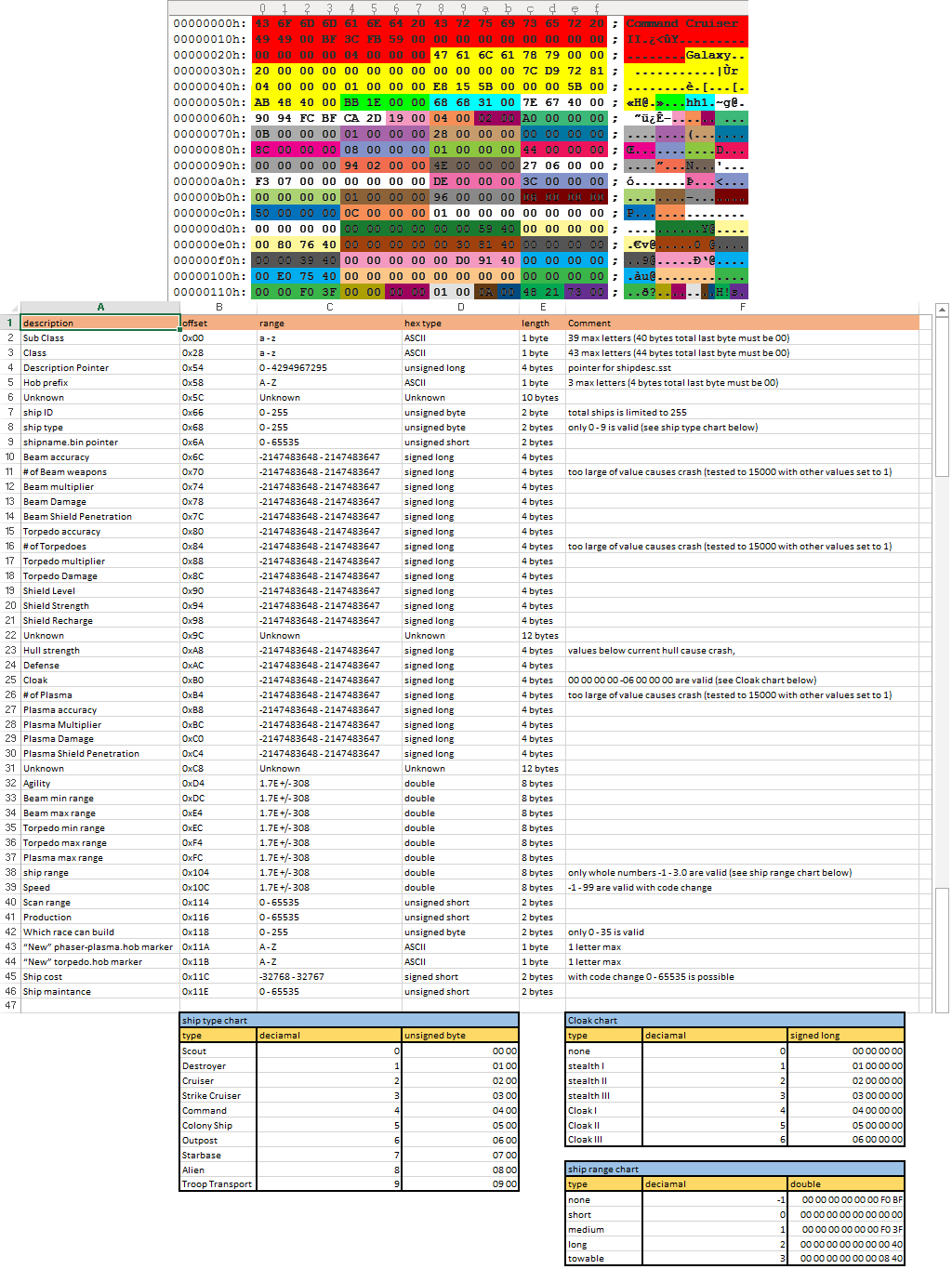 offset 0xc8:
Did you notice that the Galaxy II (command cruiser II) is the only ship that has a 01 in the first byte (followed by 11 bytes with 00). all the other ships have 12 bytes filled with 00. perhaps they planed something there but never used it. or is there anything special about the Galaxy II?
Public BotF / EF2 Teamspeak 3 Server: 83.169.13.55
Top

Dr_Breen wrote: or is there anything special about the Galaxy II?

Since the min plasma range is missing maybe +0xC8 is min range for plasma weapon?

I don't know how many bugs is too many but that point is reached somewhere before however many in BotF is.
Top

Gowron wrote:During combat, a ship is designated as "unarmed" if its minimum beam range is equal to zero.

Apart from this are we sure the 'beam minimum range?' at shiplist.sst +0xDC is actually used?


The 'minimum range?' for beam-weapons of space stations is not read from shiplist.sst but fixed in trek.exe (default -1):

Since -1 is cosine of pi (fcos function interprets values as radians) this would be 360.0 degree in shiplist.sst.


'Minimum range?' for beam-weapons of ships & monsters from shiplist.sst gets coverted into radians via *pi/360 (stations & 'plasma?' not):

Unlike stations the fcos function is applied before storing.

Note that all shiplist.sst values mistakenly referred to with 'plasma'(they are not connected with plasma.hob files) are only used for ships (not stations & monster).


1. Shiplist.sst +0xDC is an angular degree, converted into radians for fcos function (e.g. degrees/cos = 0/1 180/0 360/-1).
2. The calculated cosine values don't seem to be used but instead values depending on trek.exe phaser-slots.


Sub_52C548 assigns each slot four values depending on set bits:

for all other calculate values 1-3 using radians A & B:


Have the phaser slots in hob.files a direction value (e.g. rear/aft-mounted or up/down) or is the direction set by radians A & B?


In theory one could use different firing arcs for Heavy Cannons, Beam Banks, Arrays or Turrets on the same ship.

Unfortunately the game development stopped before different weapon types, strengths and animations could get assigned to specific weapon slots of the ship model.

- no torpedo and/or unkown ship hob slots
- phaser & plasma hob are mutually exclusive and share same ship hob & trek.exe slots
- the second energy weapon (galaxy class 2 default) has no ingame display for stats, issues when paired with main phasers and shares the phaser/plasma setting
I don't know how many bugs is too many but that point is reached somewhere before however many in BotF is.
Top
Post Reply
6 posts • Page 1 of 1